Where are the Pyrenees ?

Rising to heights above 3000 metres, this magnificent mountain chain forms one of the world’s natural borders between the European countries of France and Spain. The Pyrenees stretch from the Atlantic Ocean in the West to the Mediterranean in the East, a distance of over 430kms as the crow flies, and considerably longer if you set off on foot or by bike to travel from one coast to the other ! 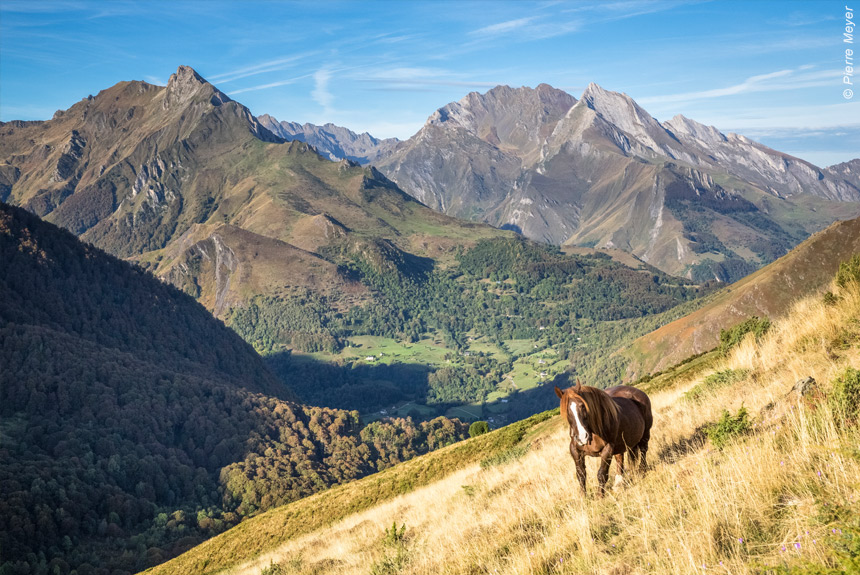 The Pyrenees offer a myriad of contrasts, not only do they span two countries (plus the Principality of Andorra) but there are vast differences to be found between the mellow foothills and the high mountains, and the coastlines of the Basque country and Catalonia both have a very distinct flavour. With its pristine and rugged environment the Pyrenees are a playground for lovers of many different types of outdoor activity, there is something for nature lovers in every season. If you love hiking or cycling, ski touring or snowshoeing, there will be a region of the Pyrenees that will blow your socks off !  In this article we have a look at some of the most beautiful areas:

The Basque Country ‘Euskal Herria’ is situated on the West side of the Pyrenees and encompasses part of the Navarre region of Spain and the department of the Pyrenees-Atlantiques in France.  The region boasts several modern and lively cities such as Bilbao, Vitoria-Gastiez, San Sebastian and St Jean-de-Luz, a beautiful and dramatic coastline and a temperate climate. The distinctive architecture and rolling green hills of the Basque Country

With it’s own distinct architecture, it’s own language, a reputation for amazing cuisine and wine, as well as lots of cultural interest, the Basque Country is the perfect region to visit for a walking holiday.

In the Languedoc region of France during the 11th Century a religious group known as the Cathars started to flourish. Such was the success of this religion, based around the principles of good and evil, that the Head of the powerful Catholic Church was quickly angered by their rapid growth. A crusade was launched against the Cathar religion, which sadly resulted in the death of thousands of men, women and children. When the crusade was launched the Cathars took refuge in fortified towns and castles; many of which were perched in spectacular hilltop locations.

Cathar Country is caracterised by its  wealth of historic towns, incredible natural beauty and delectable dining, this region of France is a real delight, and has it's own distinct character and  scenery, as well as busting with cultural sites. It is also something of a hidden gem, being relatively undisturbed by mass tourism. The ancient cité of Carcassonne in Cathar Country

The remains of these castles still stand today and walking in this region does not only offer you a warm Mediterranean climate, varied landscape and beautiful scenery, there is also a huge amount of historical interest to absorb you along the way.

The most beautiful thing about the High Pyrenees is how untouched and unspoilt they remain. Much of this region is still inaccessible by car and it is not difficult to quickly find yourself away from the madding crowd and in rugged and dramatic isolation. Of course there are some famous sites on both the French and the Spanish side of the High Pyrenees, the Cirque de Gavarnie which is a UNESCO World Heritage Site, the National Park of Ordesa, the Observatory at the Pic du Midi are some examples of sites which attract a good deal of visitors in the high summer, but there are also so many paths, mountains, and crystal clear lakes which remain little discovered, and are wonderful for hiking amongst the flora, fauna and wildlife of the Pyrenees. The High Pyrenees also offer fantastic cycling opportunities. Whether you are super fit and want to follow in the wheel tracks of the Tour de France riders, over the famous Cols of the Tourmalet and the Aubisque to name but two, or whether you would prefer to more comfortably benefit from the modern phenomenon of electrically assisted cycling, it is hard to beat the dramatic landscape, the little used roads, the circling birds of prey, and the warm welcome given by the locals in the High Pyrenees.

To their Eastern side the Pyrenees plunge into the Mediterranean sea when they reach the magnificent region of Catalonia. This coastline has a rugged and dramatic feel, the mountains of the Pyrenees stretch all the way to the coast and then drop away quickly down to the deep blue of the Mediterranean. Add to this the superb climate (almost too hot in high summer) the lingering scent of wild rosemary, thyme and lavender, the meandering vineyards on terraces that wind down to the sea, and you have all the ingredients for a superb walking or cycling holiday. 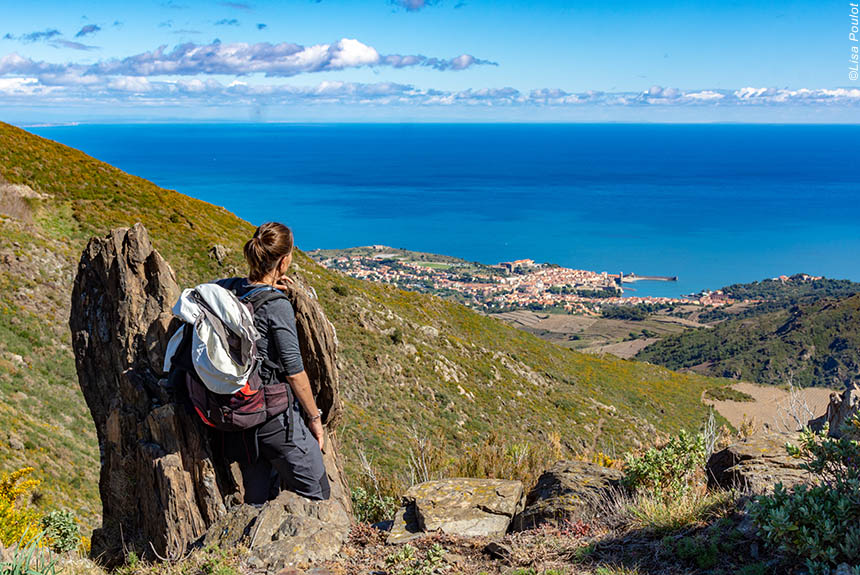 The magnificent coastline above the port of Collioure

(Catalonia is now an autonomous community of Spain consisting of four Provinces, historically the Principality of Catalonia stretched from Spain into what is now the Department of the Pyrenees-Orientales in France)  This magic, a fusion of special light, wind, sunshine, rock and brightly painted houses has attracted many famous artists to live and work here over the years. Picasso, Matisse, Dali and Malliol were all based at some point in their lives between the pretty ports of Collioure in France and Cadques in Spain.

Where are the Pyrenees in Spain? Well the Pyrenees run along the North of Spain, forming a natural border with France. The Provinces that are situated within the Spanish Pyrenees are Navarre, Aragon, and Catalonia. There are several National Parks on the Spanish side, the Aigüestortes i Estany de Sant Maurici and the Ordesa y Monte Perdido, which are perfect for hiking and other outdoor activities such as enjoying the varied Pyrenean wildlife, flora and fauna. 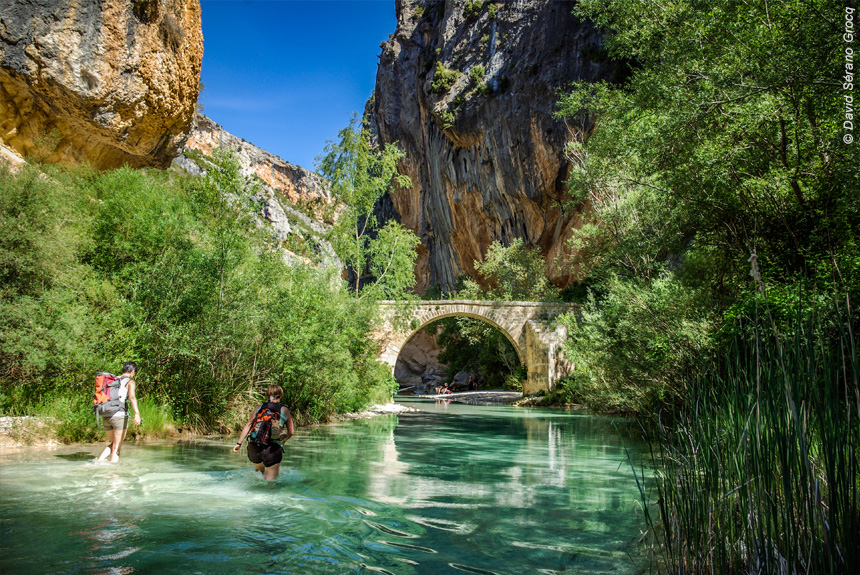 The Natural Park of the Sierra de Guara

The Natural Park and Canyons of the Sierra de Guara are nestled south of the Pyrenees in the Aragon region of Spain. For lovers of walking and canyoning this region is a real undiscovered gem.  The limestone geology is unusual with mountains that rise up to 2077m and canyons that drop hundreds of metres, the towering cliffs attract numerous birds of prey, eagles buzzards, kites and other interesting and rare species.

Another interesting fact is that 9 out of the top ten highest mountains in the Pyrenees are in Spain ! The highest is the Pic de Aneto at 3404 metres.

Click here for information about all our Walking Holidays

Click here for information about all our Cycling Holidays