How long does it take to walk the Camino ?

This is a question often asked but there is no one simple answer . The Camino de Santiago, or the Way of St James, has a history that reaches back into the depths of time. It is also surrounded by myths, legends and stories…. Here we explore what we know about these ancients pilgrimage routes.

It is said that a pilgrimage to Santiago is a journey for the soul . Today pilgrims from all over the world come to Europe to walk these routes . The reasons behind why they do it are numerous , whether it is to spend some time alone , or to spend some time with friends or family in a shared experience , or to meet interesting people from all corners of the globe , there are very few who undertake a pilgrimage and do not come out of it feeling renewed and refreshed .  But how did the routes of St Jacques de Compostelle, or St James as we know him , come into existence ?

Who was St James?

St James the Apostle , one of Jesus’ disciples , is strongly believed to have spread the Word of God in the Iberian Peninsula , the western coast of Spain . In later life he returned to Jerusalem where he was finally executed by Herod Agrippa I .  Legend has it that his remains were taken by boat to Finisterre , Northern Spain, and then by a team of oxen to their final resting place in a village which would later become Santiago de Compostela . There is not one Camino (or route) but a whole network of paths that weave their way from Portugal , Spain and France to Santiago de Compostela .  Soon after the discovery of the tomb of St James in the 9th Century pilgrims began to walk to Santiago to bear witness to it . The early pilgrims walked along existing traveller routes through Spain . As word spread people started to walk from further afield and the different routes were established .

There are many different routes , some much better known than others . Often the lesser-known routes join up with the well-trodden routes as they get closer to Santiago . How long are the routes ?

The routes are a variety of lengths , the longest is the Via de la Plata which starts in Seville and which is nearly a 1000kms long , and the shortest is the Camino Ingles ( The English Way )  which is 119kms and starts in Ferrol , near when the English pilgrims used to land their boats .

The most popular routes are the Camino Francés from St Jean-Pied-du-Port in France , the Camino Portugués from Lisbon in Portugal , and the Camino del Norte from Irun in Spain . 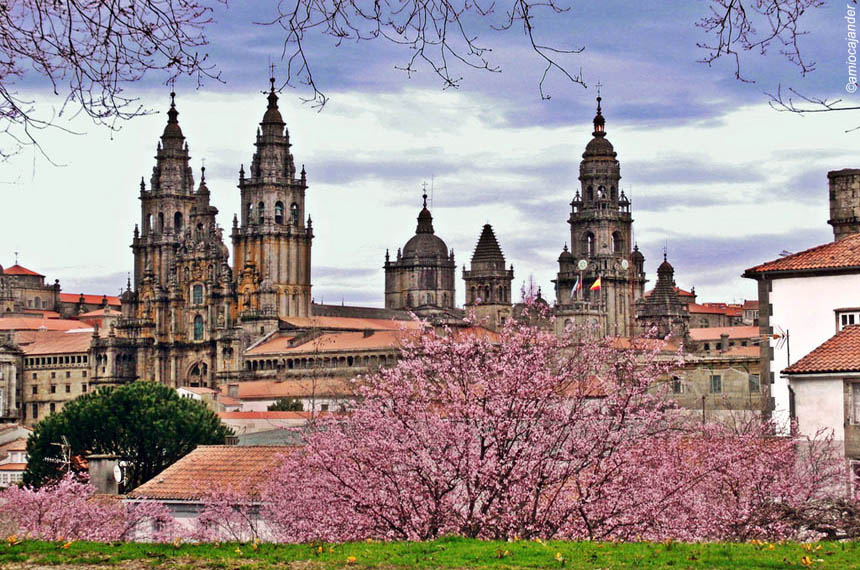 Why is the Camino a World Heritage Site?

The criteria taken into account by UNESCO for recognition was the magnificent heritage built of historical importance created to meet the needs of pilgrims  ( churches, hospitals, shelters, bridges and other structures) A heritage that bears witness to the evolution of art and architecture between Romanesque and Baroque periods .

Why the Camino Francés ?

Purely Pyrenees have chosen to offer the route of the Camino Francés  as it is the most famous of the Caminos and it has many interesting points such as the Roncesvalles Pass (1450m) from where you have stunning views of the Pyrenees . You also pass through the beautiful towns of  Pamplona , Burgos and Leon . We have created very managable stages and even though they are offered in the form of three extended trips it is possible to cut these into shorter trips if you only have a week , or a long weekend available .

All of our walking trips