The amazing Cathar Castle of Montségur

We have probably all heard of the Cathars, but do you know who they really were or where they came from ?

In fact the Cathars were a religious group that flourished in region of France known as the Languedoc from the 11th Century.  Although their beliefs were based around the principles of the existence of good and evil they were at odds with the powerful Catholic Church. Angered by the rapid growth and success of the Cathar faith the Head of the Catholic Church, Pope Innocent III, called for a Crusade against the “heretics”. The Albigensian Crusade was launched and from 1208 onwards over half a million men, women and children suspected of being Cathars were killed.

After the start of the crusade against them, the Cathars took refuge in fortified towns and castles, many of which were perched in spectacular hilltop locations near the Pyrenees. If you decide on a walking holiday in this area, From Cathar Castles To Mediterranean Collioure, for example, a visit to this castle is an absolute must. It is hard to imagine not being touched by emotion, not only by the breathtaking beauty of the site, but by the knowledge that you walk in the footsteps of over 200 Cathars who held out for nearly ten months, before being burnt alive in a field near the castle, for refusing to renounce their faith.

The walk up to the ruins of the castle is fairly steep but it’s not long, taking a maximum of 30 minutes to get to the top. You need a good pair of shoes and a small amount of courage but the reward is worth the effort ! The visit to the castle is not free, you will be asked to pay a small sum but this does include a visit to the museum situated in the village, the perfect way to finish off the experience.

From Cathar Castles To Mediterranean Collioure is a 7 night trip with 7 days walking, available with Purely Pyrenees from 1st April to 31st October.

Montségur castle, the symbol of Cathar resistance rebuilt at the start of the 13th century, was once a refuge for Cathars hunted down by the Inquisition.

The stronghold was besieged for 10 months before being taken by the royal army in March 1244, the month of the Prat dels Cremats ("field of the burned") tragedy when 225 Cathars who had refused to renounce their faith perished on a funeral pyre. A history and archaeology museum in the village of Montségur traces the history of the site and of Catharism through a rich collection of objects found during excavations at the castle.

Montségur fortress is perched on top of a rocky spur at an altitude of 1,207 metres and can be reached on foot in 30 minutes. In addition to its medieval remains, it offers visitors a magnificent panoramic view over the village below and the surrounding scenery. 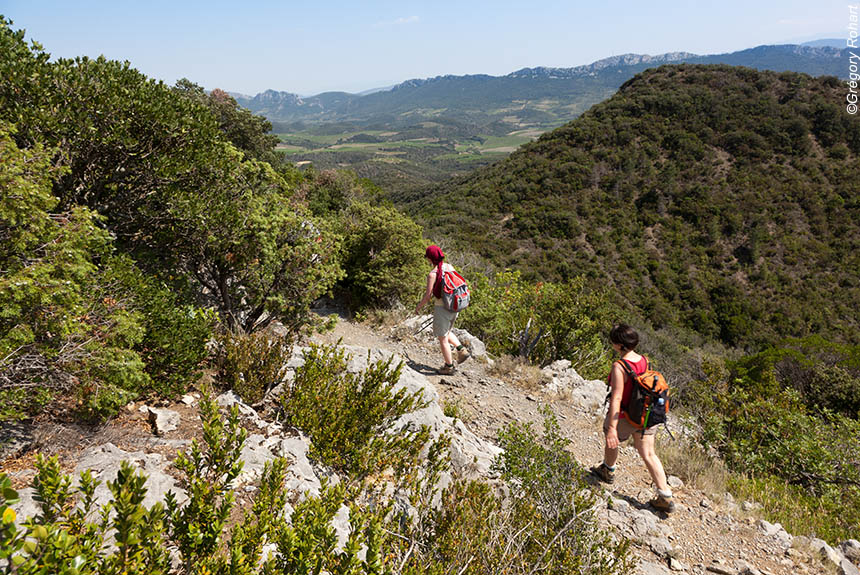 Scene of the final crusade against the Cathars, the Château de Montségur, perched on its rocky crag 1,216m above sea level, occupies a site towering above a series of cliffs. It commands an exceptional view of the Plantaurel hills, the Aude Valley and St-Barthélemy Range. In 1244, the castle surrendered its arms and 207 Cathar martyrs who had taken refuge there were burned at the stake. You can still make out the plan of the fortress which hugs the surface of the summit.

Montségur has almost a cult following, attracting Cathar history enthusiasts, hikers and lovers of charming small French villages. This tiny Midi-Pyrénées village is located in France's Midi-Pyrénées region (and the lovely Ariège Pyrénées department) on the edge of Cathar Country, near Foix and within easy striking distance of Perpignan. Montségur Château is arguably the most significant monument to the Cathar religious sect.

The Cathars believed in a natural, humble lifestyle and proved a thorn in the side of the Catholic church which they criticized relentlessly. It was in Montségur castle, perched up high and surrounded by the small streets of the village, that around six hundred Cathar 'heretics' held off the Crusaders for months. It was on March 16th, 1244, that the last Cathars surrendered. When they were finally conquered, they were given the choice to renounce their religion or perish in the flames, an agonising death which most chose.

All our walking holidays Cathars, culture and cuisine 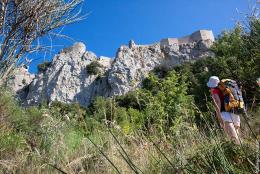 Rosie and Hugo who walked in the Pays Cathar in September

My husband Hugo is crazy for castles. The mere mention of the siege of Montsegur brings tears to his eyes. We both love walking. I’ve wanted to go back to the Pyrenees since walking in the foothills with my aunt, many years ago.