Skip to main content
Accueil > The Pyrenean > Advice > Hiking: What to do in case of a storm?
News Holidays Ideas Advice

Hiking: What to do in case of a storm?

What to do in case of a storm in the mountains?

What are the right things to do, and what should you avoid ? Discover our hiking tips.

All thunderstorms are potentially dangerous. Mainly because of lightning, strong winds and heavy rainfall which can include hail. They can arrive very fast and it is easy to be caught by surprise.

Each year in France, more than a hundred people are struck by lightning, and about thirty succumb to their injuries. Being struck by lightning is the same as being electrifed ( a flow of current through the body) which can lead to serious cardiovascular and neurological disturbances, which can sometimes be fatal.

Lightning strikes usually occur outdoors, during activities, hence the need to know what steps to take to try and prevent or reduce the risk.

The distance of a storm can be estimated by counting the number of seconds between lightning and thunder. Multiply this by 300, which is the speed of sound in metres per second. The figure obtained is the distance the storm is from you, calculated in metres.   If it is closer than 1000 meters, you need to move quickly to find shelter or prepare yourself to suffer the wrath of heaven, get down low and cover your ears.

Thunderstorm in the mountains 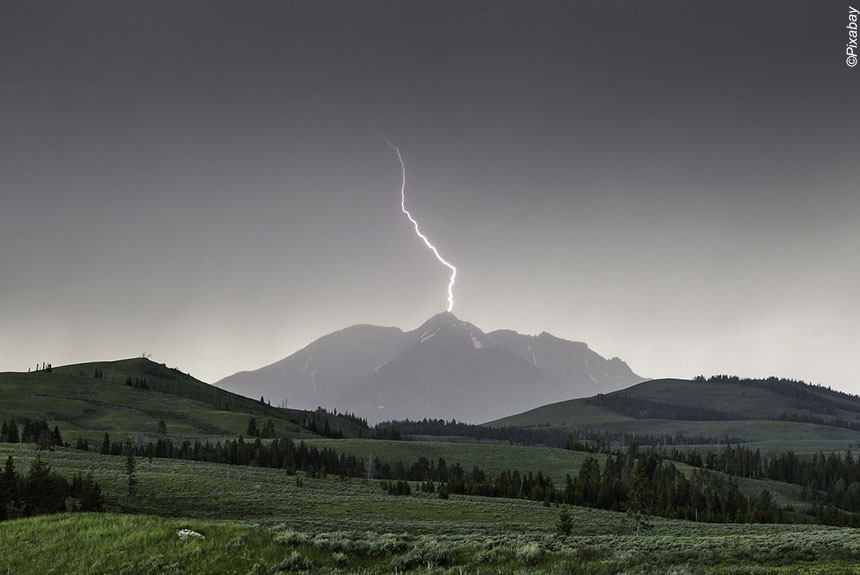 Even the most benign storm includes, by definition, lightning. This is an electrical discharge between the clouds and the ground.

When lightning strikes it descends from the clouds to the ground following  the shortest path,  and therefore usually hits the highest point, hence the importance of not becoming the highest point yourself.

The first is equivalent to almost certain death, there is really not very much you can do except to avoid being hit by taking shelter as quickly as possible.

On the other hand, it is possible to protect yourself from indirect lightning but to do this you need to understand what the electric field  and the "step voltage" are.

The electric field is formed within a radius of about 30 m from the point of impact. This whole area is considered dangerous.

The electric field decreases in force as you move away from the point of impact.  The "step voltage" is the difference in tension between parted feet, the further apart the feet the stronger the "step voltage".  To reduce the "step voltage" you should squat with your feet together.   The current will pass below you without passing through you. Quadrupeds unable to adopt this position are particularly exposed to the "step voltage". This is why we often see cows and sheep electrocuted, much to the satisfaction of the vultures.

The same phenomenon can occur when touching a wall or a tree with your hand. The current will go through the body to reach the ground rather than follow the wall or trunk.

What to do in case of a thunderstorm in the mountains?

Move away from any metal object and any naturally exposed area.

In concrete terms, you must quickly lose altitude. Do not stay on peaks or large open areas where you would stick out as an attractive prominence.

Find a place that offers the best protection: you can take shelter in a stone building.

A cabin for example. If it doesn't have a lightning conductor, which is often the case, refrain from touching the walls.

You can sometimes hide under a cornice if it is at least five times your height.

You can take shelter in the back of a small cave but do not stay near the entrance. Crouch down as far away as possible from the ceiling and walls. Avoid being pressed against a wall.

In the absence of shelter, to avoid the risk of lightning,  you should neither walk or stand legs apart. The best position is to curl up on the ground, legs bent under you. (See step voltage)

If you are not far from the car park, take refuge in the car.

It acts as a faraday cage which isolates its occupants. The current will follow the outside of the car and continue to the ground.

If you are in a canyon you must get out of the water at the first warning signs of a storm.

Storm in the Bardenas Reales Contrary to popular belief, you can use your mobile phone

At least when the antenna does not protrude from it, or very little. Although it is metallic, its size is insufficient to attract lightning. It's best to protect it from the rain however, in a plastic bag in the bottom of your rucksack.

What you should avoid doing in the case of a thunderstorm

When hiking in the mountains, do not stay up on the ridges. Peaks and ridges are particularly exposed to the risk of direct lightning and expose you unnecessarily if you stay on them. Do not run on the descent, there is always the indirect risk of slipping on wet ground and twisting an ankle.

No object should be above your head, especially if it is metallic.  Avoid umbrellas for example.  Any potential electrical conductor object (ice axe, walking stick) must be lowered, or better still placed on the ground.

In a group, do not stay tight against each other. Keep at least 3 m away. The lightning strike of one person can spread to another.
Do not shelter under a tree,  in a forest, move as far as possible from low branches.

Prevention rather than cure

When planning a hike, check the weather forecast before you leave.  Use a reliable local weather forecast service.
Leave early. Thunderstorms occur more often in the late afternoon or evening, but be aware that they can occur earlier.

Anticipate the risk of a storm. Do not enter an area which is particularly exposed to lightning (plateau, ridge, summit, etc.) if a storm is approaching.
Look up from time to time,  and watch if the skyline looks threatening.

Have a backup plan, and an escape route.  Be prepared to turn around if the situation looks dangerous, it is easy to think the storm will always miss you but that is not always the case.